The Idaho CMV Advocacy Project is dedicated to promoting awareness and education to Idaho women who are pregnant, planning to become pregnant or just want more information regarding Cytomegalovirus (CMV) and the dangers it can cause to unborn children. It was founded by two parents of children with CMV, Jessica Rachels and Rebekah Hall, and Idaho State University Doctor of Audiology student Claire Szewczyk. 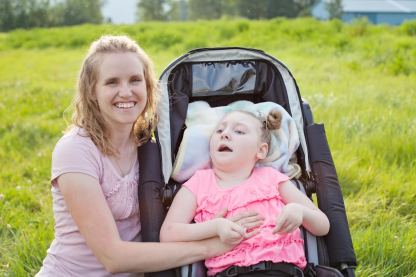 While pregnant with her second child, she was running a small in home childcare and working one day per week at a childcare center. Her OB doctor was aware of her occupation but did not see the importance of educating her on CMV. Regrettably, Jessica continued working in a high risk environment and her choice to protect her unborn baby was taken away. Natalie her daughter was born at 39 weeks and seemed to be a typical, healthy baby minus continuing to fail her newborn hearing screening, a small head size (which was mentioned later), and reflux issues. At two and a half months of age, blood work confirmed CMV and intensive hearing tests showed that she had profound and severe hearing loss. Today Natalie is a happy, social, smiley, giggly eleven year old girl despite being severely affected by CMV. She’s undergone ten surgeries, has implanted devices, uses a wheelchair, and is developmentally at a four to six month old age. After attending two CMV conferences Jessica and her husband, Patrick feel blessed to be apart of the Idaho CMV movement. They are excited to see how God can use them and others to educate people around the state on CMV and prevent other babies from being afflicted by this horrific virus.

With a doctorate in clinical psychology from Fuller Theological Seminary’s School of Psychology in Pasadena, California, Rebekah works professionally as a diagnostician and treatment provider for children with developmental and intellectual disabilities. She and her husband, Jeff, also a psychologist, had worked in the field for nearly a decade before the birth of their daughter, Keira. After what was thought to be a normal, healthy pregnancy, Keira was born very sick and was diagnosed with CMV at 3-days-old. Keira suffers from microcephaly, cerebral palsy, failure to thrive, and vision impairment. Rebekah is happy to be part of the team that is working toward passing CMV legislation in Idaho to help educate physicians and parents-to-be about the prevention and treatment of CMV.

Erica is a Bachelors prepared registered nurse who lives in Nampa with her husband and three daughters. While her first pregnancy was free of any complications, her second pregnancy quickly became high-risk. Originally pregnant with triplets, she and her husband found out that they had lost one baby during the first trimester. But because she was pregnant with multiples, she was already established with a high-risk maternal fetal specialist who was aware of CMV. She was tested for and diagnosed with CMV after persistent cold symptoms and a fever during her first trimester. Even though Erica had worked in healthcare for years, CMV was not something she was familiar with. After much research, she and her doctor settled on a treatment of immunoglobulin infusions, and an amniocentesis later confirmed that the treatments had worked and both of the babies were born free from CMV.

Erica is thrilled to be a part of the team working to raise awareness of CMV, and hopeful that it will make a real difference in the lives of Idahoans.

A first year Doctor of Audiology student at Idaho State University, Claire first became interested in Cytomegalovirus (CMV) when she volunteered for the Cytomegalovirus Public Health and Policy Conference in 2014. As an undergraduate preparing for studies in hearing sciences, she was fascinated that CMV was the number one non-genetic cause of sensorineural hearing loss in children. In 2015, she worked as a member of the Early Hearing Detection and Intervention program in Salt Lake City and a part of the Utah Cytomegalovirus Public Health initiative. It was there she became engaged in advocacy for CMV and helped with a variety of public awareness campaigns. Now as an Idaho citizen, she is proud to be working with a project campaigning for the passage of CMV legislation, as well as dedication towards providing awareness and education of the virus to women across the state.